Stallings’ Roller-Coaster Ride at the Barbasol 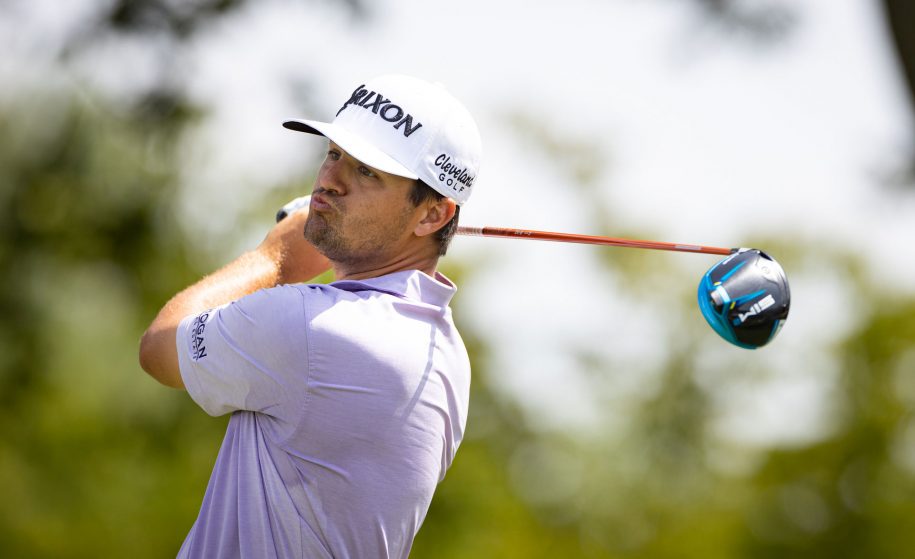 NICHOLASVILLE, KY (July 17, 2021) – Steve and Pam Stalling have been watching their son Stephen Jr. play golf for the better part of the last 20 years.

“Golf is life,” Pam said, summing up the family’s focus.

But it’s doubtful that Stephen has ever treated his parents to the up-and-down ride he took them on during the first two days of the Barbasol Championship.

“It was such a roller coaster,” the 26-year-old Louisville native said after going from 7-under to 1-over and back to 4-under by the time he finished Friday afternoon.

Steve said his son’s topsy-turvy play was difficult to watch: “Never had anything like that before, not that severe. It was tough.”

Stephen began the tournament red-hot. He was 6-under through eight holes on Thursday. He cooled off after that, but got to 7-under with two holes to play before rain and impending darkness halted play.

When he returned to Champions at Keene Trace early Friday morning, he closed his first round with a double bogey that left him at 5-under.

That left him 1-over par, and his chances of making the cut looked remote.

But the lefty-swinging Stallings turned things around. He carded five birdies over the next nine holes, and had clutch up-and-down pars on the last two holes to finish at 4-under.

He then had to sit, wait and hope he would make it to the weekend. He wasn’t optimistic, figuring the cut would move to 5-under.

“Stranger things have happened, though,” he said.

Stallings wound up making the cut on the number and stayed alive.

Still, Stallings, who is playing in his fifth PGA TOUR event this season, couldn’t help but think what might have been if not for that rough patch on Friday.

“I played good enough to be right there near the lead,” he said. “If it wasn’t for that (six-hole) stretch, I’m at least 10-under par. I was 8-over in that stretch. It was crazy.”

But that won’t change his mindset.

Throughout his career, Stallings, who won a state high school title at St. Xavier in 2011, and went on to captain UK’s golf team under Coach Brian Craig, has never lost his determination.

“You can ask Coach Craig. Stephen’s probably one of the hardest workers he’s ever had. He won’t give up,” his dad said.

Stephen learned the game from his father, who played high school golf at Trinity (Scott Beard and Dave Peege were his teammates), and in college at LSU.

Stephen is a natural right-hander, but he learned to play left-handed by watching his dad swing right-handed on the range.

He has plenty of people watching him in the Barbasol, including his parents, girlfriend and lots of buddies from his high school and college days.

The most stressed spectator undoubtedly is his mom.

“I always tell people it never gets any easier with your child,” she said. “Whether you’re watching them play Little League, or helping them study for a test.

“I look calm, but I’m churning on the inside.”

Especially after the roller-coaster ride her son took her on the past two days.