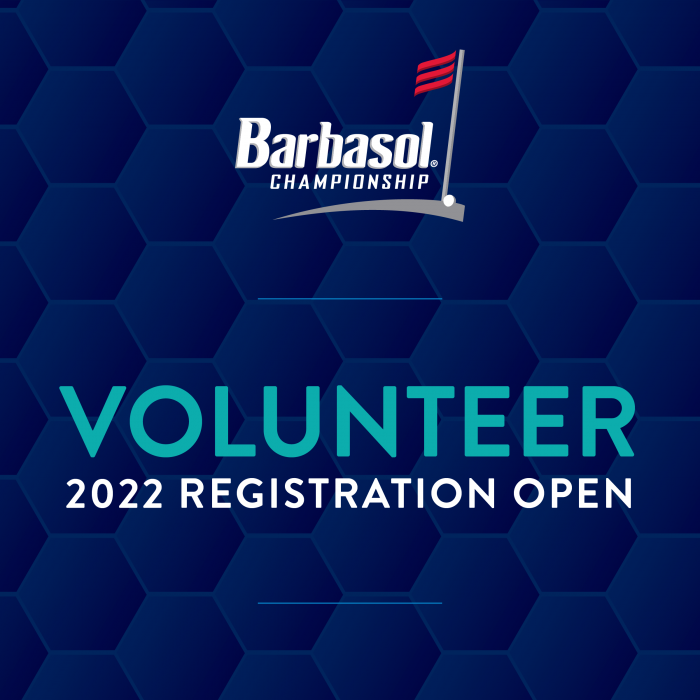 More than 800 volunteers support the tournament each year.

The Barbasol is coming off its best year since arriving in Kentucky in 2018 in terms of attendance, television viewership, and the overall excitement brought on by world-class play and a six-round sudden-death playoff that saw Seamus Power of Ireland edge J.T. Poston.

“More than 800 volunteers help bring the Barbasol Championship to life every year,” said Tournament Director Darren Nelson. “Our volunteers are the heartbeat of the Barbasol and allow us to allocate essential resources to the six local charities we’re supporting this year through Caddie127. We couldn’t do it without them or our Official Volunteer Sponsor – Commonwealth Credit Union.”

This year’s event will once again be played at the picturesque Champions at Keene Trace Golf Club in Nicholasville, Kentucky, just outside of Lexington.

Golf knowledge isn’t required to volunteer. The Barbasol Championship tournament has a variety of opportunities for golfers and non-golfers alike.

Volunteer committees range from Shotlink Operators, On-Course Marshals, and Standard Bearers to merchandise volunteers, manage crowds, walk with the Pros, and more. A full list of committees can be viewed at https://www.barbasolchampionship.com/volunteer/. Committees are assigned on a first-come, first-served basis.

Returning and new volunteers must complete online registration at cuetoems.com/barbasol_2022/volunteer.aspx.

All 2022 volunteers will receive the following package, in exchange for their generous donation to support the tournament’s charitable mission:

Additional new highlights for the 2022 Barbasol Championship include:

Barbasol Championship tickets will go on sale Monday, May 9: barbasolchampionship.com/tickets/