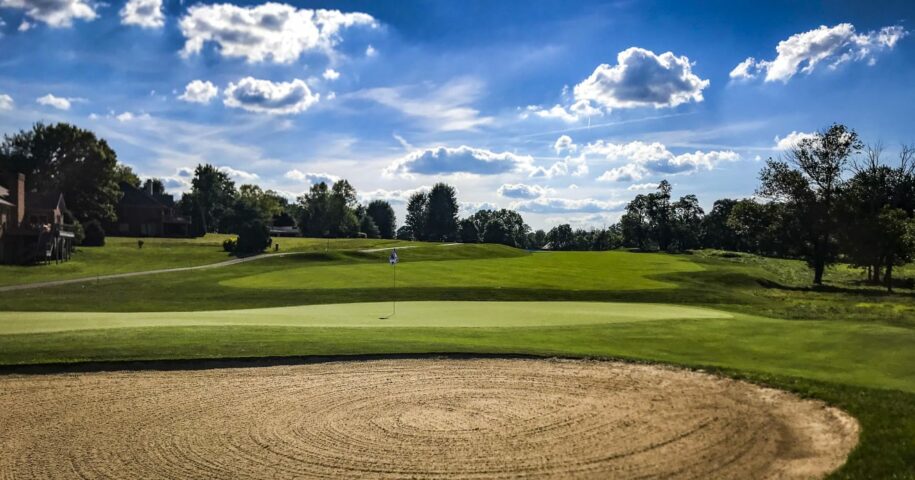 A look inside the Barbasol Championship by Mike Fields.

NICHOLASVILLE, KY (July 15, 2019) – The company’s name – Global Golf Management – tells you it has international reach. GGM is involved in 40 professional golf events around the world, including the Tour Championship (FedEx Cup) in Atlanta, the CJ Cup in Korea, the Zozo Championship in Japan, the Hero World Challenge in the Bahamas, the Presidents Cup in Australia . . .

. . . and this year’s Barbasol Championship right here in Central Kentucky.

Wherever GGM puts down stakes at a tournament, it first makes sure it has local roots in the community.

Earlier this year when GGM took over the $3.5 million Barbasol Championship at Champions at Keene Trace, it immediately looked for somebody in Lexington to serve as tournament director.

“The key whenever we do these, we always try to get someone from the area,” said GGM principal Mike Harmon. “We could bring in people from all over, but if they don’t know the local market it does you no good.”

That’s why Bryan Pettigrew of Lexington was hired as tournament director in February.

Pettigrew was involved in the Breeders’ Cup World Championships for more than 15 years. He was Chief Marketing Officer, and Senior Vice-President of Marketing and Sponsorship when Keeneland hosted the event in 2015.

As tournament director of the Barbasol, Pettigrew oversees marketing, operations and business development, including sponsorship and hospitality sales.

He’s made a smooth transition from horse racing to golf.

“(GGM) impressed upon me to hire local people who have proven track records and know Lexington,” Pettigrew said.

Pettigrew said the most important challenge he faced early on was “basically building a business plan from scratch in three to four months” leading up to the July tournament.

“We started reaching out to the corporate partners from last year, talking to them and asking for their support again.”

Volunteers were also a top priority. He met with last year’s chairmen and chairwomen to find out what went right and what went wrong for the volunteers during the inaugural Barbasol Championship at Keene Trace last summer.

The response has been positive. The target number of 600 volunteers has almost been reached.

GGM, of course, provides lots of support for the tournament, particularly from Harmon, as well as Mike Kelley and Zach DeCicco (operations and logistics), and Selina Maddox (volunteers).

“It gives great comfort to the PGA TOUR knowing they’re on board and helping with operations,” Pettigrew said, noting that GGM just a few weeks ago helped launch the Rocket Mortgage, a first-year tournament in Detroit.

“It’s hard to compare the Barbasol or Rocket Mortgage with 20- or 30-year-old entities, but (GGM) knows how to start small and build each year with the newer tournaments.”

Harmon has a special interest in the Barbasol Championship because he helped create it in 2015, working with Barbasol and the Robert Trent Jones Golf Trail. The tournament was held in Opelika, Alabama, for three years before moving to Lexington last July.

Bad weather – lots of rain and a severe storm – conspired to keep attendance down at Keene Trace in 2018.

“Weather is the one thing you can’t control, and when it did what it did last year it was hard to tell what the real crowd might have been,” Harmon said.

“I think the community will come out this year. We should get a good bump in attendance. We’ve built some new areas – like the Grey Goose and Drakes restaurant party deck between the 18th and 9th (greens). That should be a fun area for the locals and out-of-towners.”

“That gives us room to build more hospitality on the finishing hole,” Kelley said. “And general parking will be at Southland Christian, so it’ll be a shorter shuttle ride over to the bus depot (at Champions) than it was from Keeneland last year.”

The past few months have been hectic for Pettigrew as he’s tried to get everything ready for the only regular PGA TOUR event in Kentucky.

With his Breeders’ Cup background, he’s used to the pressure of pulling off a major sports happening.

In fact, he said he “thrives on it. I only sleep about four hours a night anyway. That’s how I’m wired.

“I just want to make sure every detail is in a bucket, somebody’s responsibility, so it’s a great event.”

That doesn’t mean he’s totally immune to the looming deadline.

“The only thing I don’t like is that countdown clock on our Facebook page,” he said with a laugh. “When I check on our social media, that’s the first thing that pops up.”

About the Barbasol Championship

The Barbasol Championship’s charitable arm, Caddie127, reflects the biblical principle from James 1:27 “to look after orphans and widows in their distress and to keep oneself from being polluted by the world.” Just as Caddies and their players support one another, so will Caddie127 support local philanthropic organizations that benefit and empower women and children. Caddie127 has named All God’s Children, Kentucky Children’s Hospital (UK Healthcare), the Kentucky Region of the Make-A-Wish Foundation, Refuge for Women, and the Woodhill Community Center as their 2019 charitable partners.